Seth Bullock left Etobicoke, Ontario and became a marshal in Montana. Soon he heard stories of gold in Deadwood. Rather than searching for gold, he wanted to open a hardware store with best friend and longtime partner, Sol Star. At the camp, he met Wild Bill Hickok. When Hickok was murdered, Bullock pursued the killer into the Black Hills and captured him, taking him back to Dakota for trial. After his return, he became sheriff of Deadwood. Bullock, one of the few honest men in the camp, was enlisted to look after a gold claim for Alma Garret, an upper class East Coast woman whose husband was killed by Swearengen's men over that claim. Eventually, they became sexually involved despite the fact Bullock is married to his brother's widow and is the stepfather of their son.

He decides ultimately to end his relationship with Alma when his wife Martha and son William come to Deadwood. Later he learns Alma is pregnant with his child, but the pregnancy ends in miscarriage after she is married to Ellsworth. The relationship between Bullock and Martha continues to be rocky in the aftermath of her arrival until they are struck by tragedy, when William is killed by a wild horse. Though the tragedy is devastating, it brings the two closer together. Martha chooses to stay with him in Deadwood.

Although his honest character is instinctively repulsed by Swearengen (and vice versa), the two form an uneasy alliance, and slowly seem to form a fondness for each other. They try to defend the camp against outside interests (e.g., the Hearst mining interests, the territorial government, Alma Garret's in-laws) who have begun to appear in the camp, since Deadwood shows the potential of some degree of wealth. His fiery temper however, often clouds his judgment, distancing Bullock from those closest to him. He makes a dangerous enemy of George Hearst because his determination to stand against his criminal conduct. This puts him in considerable danger, as Hearst does at one point try to create circumstances in which Bullock might be lured into a lethal ambush. 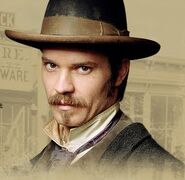 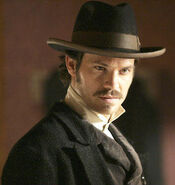 Add a photo to this gallery

Retrieved from "https://deadwood.fandom.com/wiki/Seth_Bullock?oldid=4562"
Community content is available under CC-BY-SA unless otherwise noted.